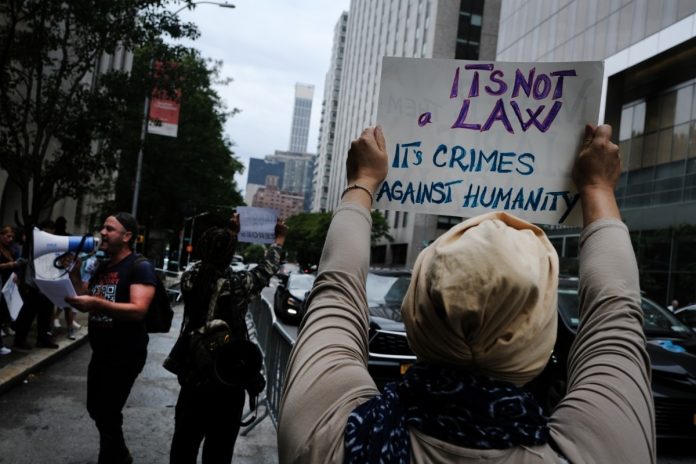 As thousands of healthcare professionals in New York state were rushed to comply with a COVID-19 vaccine mandate that went into effect Monday, 17 Christian professionals who filed a lawsuit seeking religious exemptions earlier this month stood firm in their convictions — even under threat of losing their jobs.

The mandate requires that more than 600,000 workers in public and private hospitals and nursing homes were to receive their first dose of the vaccine by midnight Monday to continue working on Tuesday.

Religious liberty advocate group Thomas More Society is representing over a dozen workers, including Baptists and Catholics. In the lawsuit, the group argues New York Gov. Kathy Hochul, who is also Catholic, is disrespecting and bullying medical workers with sincerely held religious beliefs against the COVID-19 vaccine.

“New York’s Governor Hochul is using every strong-arm tactic she can to attempt to coerce employees into taking vaccines against their will,” Thomas More Society Special Counsel Christopher Ferrara said in a statement Monday.

“She is also demonstrating disrespect, at a minimum, if not outright hostility to the deeply held religious convictions of our clients as well as thousands of others. We have solid grounds for prevailing on our motion for a preliminary injunction.”

Ferrara contends that Hochul is trying to “coerce as many as possible into taking the vaccine before the court rules.”

“And now she threatens to declare a state of emergency she herself has created by calling for the firing of dedicated front line health care workers who treated patients for 18 months without being vaccinated – often contracting COVID, recovering, and returning to front line medical care – are now being depicted as disease-carrying villains,” the lawyer said. “This is not science. This is demagoguery.”

On Sept. 14, U.S. District Judge David Hurd issued an order to temporarily prevent New York’s health department from rejecting employer-approved religious exemptions to the vaccine mandate. The order was extended on Sept. 20 and will last until Oct. 12. According to the legal group, Hurd canceled a hearing scheduled for Tuesday and will deliver a decision by Oct. 12.

“The seventeen plaintiffs in this action — practicing doctors, M.D.s fulfilling their residency requirement, nurses, a nuclear medicine technologist, a cognitive rehabilitation therapist and a physician’s liaison — are united in their conscientious religious objection as Christians to being inoculated at all, much less ‘continuously,’ with any of the available COVID-19 vaccines because they all employ fetal cell lines derived from procured abortion in testing, development or production of the vaccines,” said the lawsuit filed by Thomas More Society.