A rare anchor “only seen a handful of times in the last 200 years” has been uncovered in a small harbour in Devon.

The anchor was found by a local history group in Turnchapel, Plymouth, is believed to date to the 1800s and to have come from a Royal Navy ship. 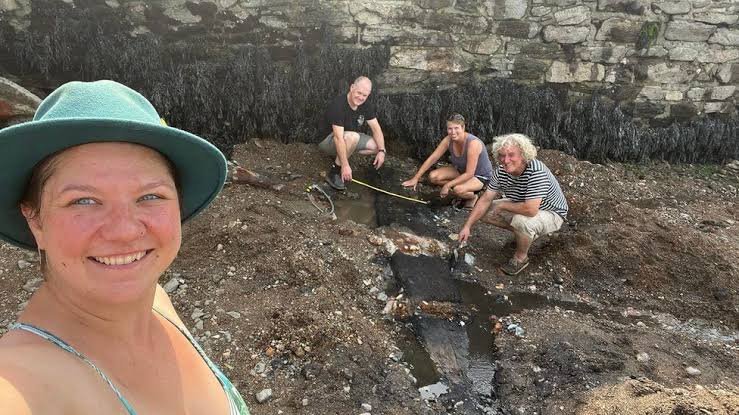 It appeared at the base of a harbour wall with its wooden stock attached.

Archaeologists have been excavating and said it was an “amazing opportunity… to engage people with maritime archaeology”.

Mallory Haas, Director and Maritime Archaeologist for The SHIPS Project Community Interest Company said: “Anchors of this age and style with their wooden stocks are very rare, and being able to have one that is on the foreshore is rather amazing.”

“I have only seen one other one that was in the mud on the Thames river in London.

The team hopes to find out more about the origins of the anchor
“We can approximate its age due to it being incorporated into the South harbour wall, the anchor likely dates to the early 1800s, and is English in design and is also likely Royal Navy, however we did not find any markings, like the broad arrow.”

The anchor was first spotted by the Turnchapel History Group and is thought to have been laid against the harbour wall prior to it being built, and incorporated into the harbour landscape.

Those involved now intend to make a detailed drawing of the anchor from the measurements gathered and compare it to known designs and to understand the type or size of ship it may have come from.