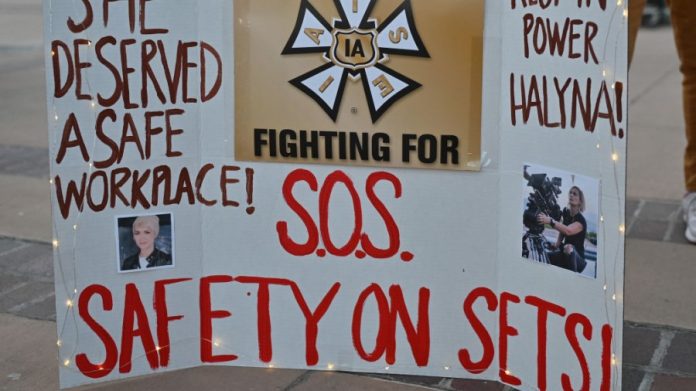 As a shocked and saddened industry was reminded this week, many productions still use guns — real guns — when filming. And despite rules and regulations, people can get killed, as happened last week when Alec Baldwin fatally shot cinematographer Halyna Hutchins after he was handed a weapon and told it was safe.

The tragedy has led some in Hollywood, along with incredulous observers, to ask: Why are real guns ever used on set, when computers can create gunshots in post-production? Isn’t even the smallest risk unacceptable?

For Alexi Hawley, it is. “Any risk is too much risk,” the executive producer of police drama “The Rookie” announced in a staff memo Friday, saying the events in New Mexico had “shaken us all.”

There “will be no more ‘live’ weapons on the show,” he wrote in a note.

Instead, he said, the policy would be to use replica guns, which use pellets and not bullets, with muzzle flashes added in post-production.

Another film director, Craig Zobel, called for the entire industry to follow suit and said gunshots on that show were added after filming, even though on previous productions he has used live rounds.

“There’s no reason to have guns loaded with blanks or anything on set anymore,” Zobel wrote on social media. “Should just be fully outlawed. There are computers now. The gunshots on ‘Mare of Easttown’ are all digital.

Bill Dill — a cinematographer who taught Hutchins, a rising star in her field, at the American Film Institute — expressed disgust in an interview over the “archaic practice of using real guns with blanks in them, when we have readily available and inexpensive computer graphics.”

Dill, said there was added danger from real guns because “people are working long hours” on films and “are exhausted.”

“There’s no excuse for using live weapons,” he said.

A petition was launched over the weekend for real guns to be banned from production sets.