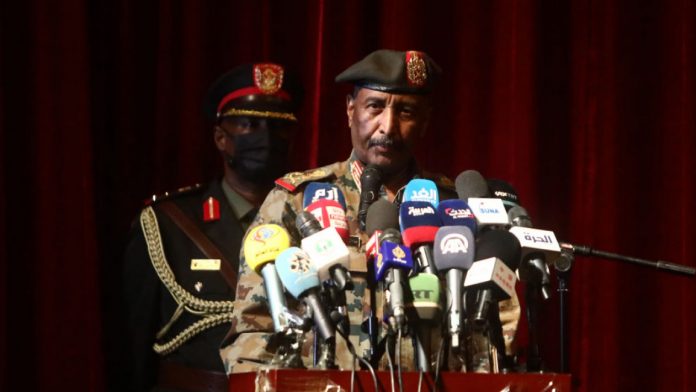 Sudan’s leading general declared a state of emergency Monday, hours after his forces arrested the acting prime minister and other senior government officials in what the information ministry said amounted to a military coup.

In a televised address, General Abdel-Fattah al-Burhan announced that he was dissolving the country’s ruling Sovereign Council, as well as the government led by Prime Minister Abdalla Hamdok.

Burhan is a military officer who headed the Sovereign Council, a power-sharing ruling body.

Burhan said a new technocratic government would lead the country to elections and then set the date for elections at July 2023.

He said quarrels among political factions prompted the military to intervene. He also announced the suspension of the anti-corruption task force.

In response, thousands flooded the streets of the capital, Khartoum, and its twin city of Omdurman to protest the apparent military takeover.

Footage shared online appeared to show protesters blocking streets and setting fire to tyres as security forces used tear gas to disperse them. Protesters could be heard chanting, “The people are stronger, stronger” and “Retreat is not an option!” as plumes of smoke filled the air. Videos on social media also showed large crowds crossing bridges over the Nile to the centre of the capital.

Armed forces fired live rounds at Sudanese people who took to the streets of Khartoum to protest against Monday’s apparent coup, according to the information.

There has been a significant amount of international reaction and while the US has said it is extremely alarmed, the European Union has said it expresses the utmost concern at what is going on.