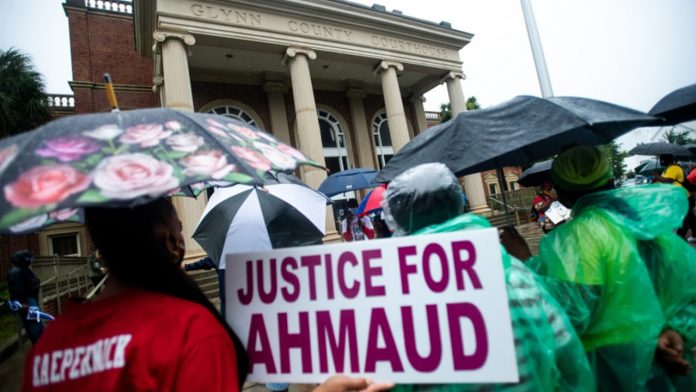 Attorneys resumed questioning potential jurors Tuesday in the trial of three white men charged with chasing and killing Ahmaud Arbery following a slow start and some admonishment from the judge to speed things along.

The fatal shooting of Arbery on a residential street outside the port city of Brunswick on Feb. 23, 2020, sparked a national outcry after a cellphone video of the killing leaked online two months later.

Father and son Greg and Travis McMichael and a neighbor, William “Roddie” Bryan, are charged with murder and other crimes in the 25-year-old Black man’s death.

Prosecutors and defense attorneys spent hours Monday questioning the first panel of 20 potential jurors. That’s out of 600 summoned to jury duty, with 400 more on deck to show up next week if needed.

Eight potential jurors were dismissed and the status of four others who had undergone individual questioning remained unresolved when court adjourned Monday evening.

More than once he stopped defense attorneys as they asked jury panelists bluntly whether they already believed the defendants were guilty —- or pressed those who expressed negative impressions of the men on how they would remain impartial.

Jason Sheffield, an attorney for Travis McMichael, insisted lawyers need to ask such questions to weed out jury pool members who have already made up their minds.